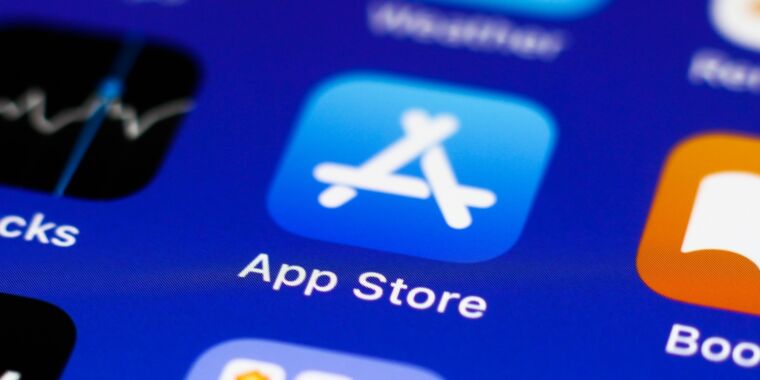 Apple is appealing the court ruling that said the company must let iOS app developers direct customers to payment options other than Apple’s in-app purchasing system. Although Apple previously called the ruling a “resounding victory” because its App Store business model was generally upheld, the company is seeking a stay that would prevent implementation of the injunction requiring Apple to loosen its app rules.

On September 10, Judge Yvonne Gonzalez Rogers of US District Court for the Northern District of California ruled in favor of Epic Games’ claim that Apple violated California’s Unfair Competition Law. The judge issued a permanent injunction that said Apple must stop “prohibiting developers from (i) including in their apps and their metadata buttons, external links, or other calls to action that direct customers to purchasing mechanisms, in addition to In-App Purchasing and (ii) communicating with customers through points of contact obtained voluntarily from customers through account registration within the app.”

If Apple isn’t successful in blocking that injunction, the iPhone maker will have to comply with it beginning on December 9. That would make it easier for third-party app developers to collect revenue without giving Apple commissions of up to 30 percent.

Apple recently made some concessions to third-party developers, agreeing in a pending settlement to let them notify customers of other payment options using email addresses and phone numbers obtained within their apps and letting music, video, and book apps link to other purchase options beginning in early 2022. But Apple doesn’t want to allow games and other types of iOS apps to link to different payment options.

Apple claimed that “precipitous implementation” of the injunction’s requirement to let developers deploy in-app “buttons, external links, or other calls to action” would “upset the careful balance between developers and customers provided by the App Store and would irreparably harm both Apple and consumers. The requested stay will allow Apple to protect consumers and safeguard its platform while the company works through the complex and rapidly evolving legal, technological, and economic issues that any revisions to this guideline would implicate.”

Apple argued that the injunction will create security risks for users:

Links and buttons to alternate payment mechanisms are fraught with risk. Users who click on a payment link embedded in an app—particularly one distributed through the curated App Store—will expect to be led to a webpage where they can securely provide their payment information, email address, or other personal information. A developer may thus try to take advantage of user trust, carefully cultivated by Apple’s safe and secure platform, and deceive users into providing their payment information to a malicious platform. And while developers are required to disclose their handling of users’ privacy information within the app, there is no way for Apple to confirm that a developer’s payment page will adhere to those representations.

Moreover, because external links operate outside of iOS—and outside of Apple’s commerce engine—Apple has no visibility into their technological and financial functions, and limited ability to redress fraud by identifying and removing bad actors from the App Store.

Apple claimed that “implementation of the injunction would require substantial technical and engineering changes,” including “technical solutions to address the security and privacy vulnerabilities” and new app-review processes and guidelines. Apple also argued that “the injunction is overbroad in that it extends beyond Epic and affects all developers in the United States.”

Last month, Apple described the ruling as a “resounding victory,” saying that “Apple’s App Store business model has been validated” because the court “ruled that this framework is lawful and Apple was justified in terminating Epic’s status as a developer on the App Store.” Despite issuing the permanent injunction against Apple, the judge also ruled in favor of Apple’s counterclaim for breach of contract and ordered Epic to pay Apple damages “equal to 30 percent of the $12,167,719 in revenue Epic Games collected from users in the Fortnite app on iOS through Epic Direct Payment between August and October 2020” and 30 percent of revenue after November 1, 2020. Epic notified the court on September 12 that it would appeal to the US Court of Appeals for the Ninth Circuit.

Judge Gonzalez Rogers found that Apple is not “an antitrust monopolist in the submarket for mobile gaming transactions” but ruled that “Apple’s conduct in enforcing anti-steering restrictions is anticompetitive.” She called the permanent injunction a “measured remedy [that] will increase competition, increase transparency, [and] increase consumer choice and information while preserving Apple’s iOS ecosystem, which has procompetitive justifications.”

While the judge found that Apple violated California law, Apple pointed out in its motion for a stay that “Epic failed to prove that Apple violated any federal or state antitrust law.” Apple claimed that it is likely to succeed on appeal because “Epic’s theory of liability under the UCL [Unfair Competition Law] cannot be reconciled with the findings and conclusions the court made elsewhere in its opinion, particularly in recognizing the procompetitive justifications for Apple’s IAP [in-app purchasing] requirement. Indeed, the Supreme Court has recognized the procompetitive effects of anti-steering provisions in particular, as they fulfill the ‘promise of a frictionless transaction.’ The undisputed evidence in this case established that operators of two-sided transaction platforms, like the App Store, commonly impose some kind of steering restrictions on platform participants.”