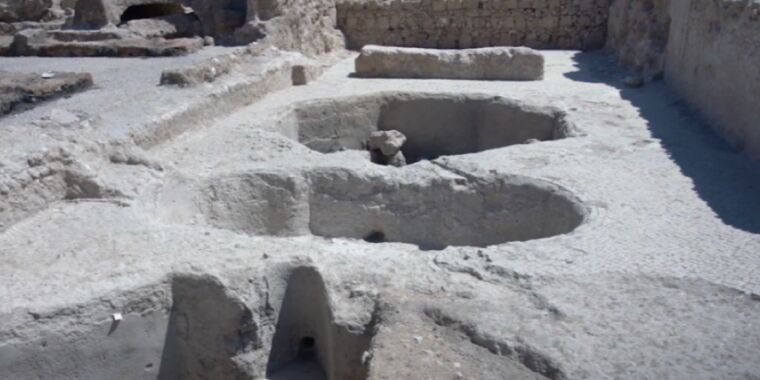 The Israeli archaeological site known as Yavne dates back to the late Bronze Age and late Iron Age and is considered one of the most significant Jewish historical sites after the Romans destroyed the temple of Jerusalem in 70 CE. Apparently, Yavne was also a major producer of wine during medieval times. Archaeologists have excavated what they believe was once a wine factory, likely the largest in the world some 1,500 years ago during the Byzantine era, according to a post (and accompanying video) on the Facebook page of the Israel Antiquities Authority (IAA).

“Drinking wine was very common in ancient times for adults and children alike,” the IAA post reads. “Since water was not always sterile or tasty, wine was also used as a kind of ‘concentrate’ to improve the taste or as a substitute for drinking water,” according to Dr. Elie Haddad, Liat Nadav-Ziv, and Dr. Jon Seligman, who are the directors of the excavation on behalf of the IAA.

Prior excavations at Yavne have uncovered several Iron Age and Bronze Age burial points, Philistine artifacts, and pottery shards, as well as the ancient city’s harbor, abandoned sometime in the 12th century CE. (The book of Maccabees describes the burning of the harbor and its fleet, so it holds special significance in Jewish tradition and history.) A 2005 excavation unearthed the gate room of a castle built during the Crusades, when the city was known as Ibelin.

Another excavation in 2019 yielded numerous pottery kilns and several gold coins dating back to the 9th century CE—gold dinars issued during the North African Aghlabid dynasty. Another 425 gold coins found last year dated back some 1,100 years to the Abbasid period. And earlier this year, archaeologists discovered a 1,600-year-old multicolored mosaic hailing from the Byzantine period (circa 400 CE), complete with ornamental geometric motifs.

This latest archaeological find has unearthed five winepresses, along with a treading floor for crushing the grapes and warehouses to store the wine for aging. The archaeologists also found pottery kilns for firing the long clay amphorae (“Gaza jars”) in which the wine was stored, along with several intact jars, tens of thousands of fragments, and various children’s toys, among other artifacts. The team also uncovered even older winepresses from about 2,300 years ago, from the Persian period. “The excavation shows a continuum of existence of the wine industry at the site over many centuries,” the archaeologists said.

“We were surprised to discover a sophisticated factory here, which was used to produce wine in commercial quantities,” the team said in a statement. “Furthermore, decorative niches in the shape of a conch, which adorned the winepresses, indicate the great wealth of the factory owners. A calculation of the production capacity of these winepresses shows that approximately two million liters of wine were marketed every year, while we should remember that the whole process was conducted manually.”

“’Gaza and Ashkelon Wine’ was considered a quality wine brand of the ancient world, whose reputation had spread far and wide, a bit like Jaffa oranges denote their origin and quality today from Israel,” the archaeologists further explained. “Everyone knew that this was a product from the Holy Land, and everyone wanted more and more of this wine. The wine received its name as it was marketed through the ports of Gaza and Ashkelon. So far, other sites where wine was produced are known from the southern coastal plain, but now, we seem to have found the main production center of this prestigious wine. From here, commercial quantities were transported to the ports, and then throughout the Mediterranean basin.”