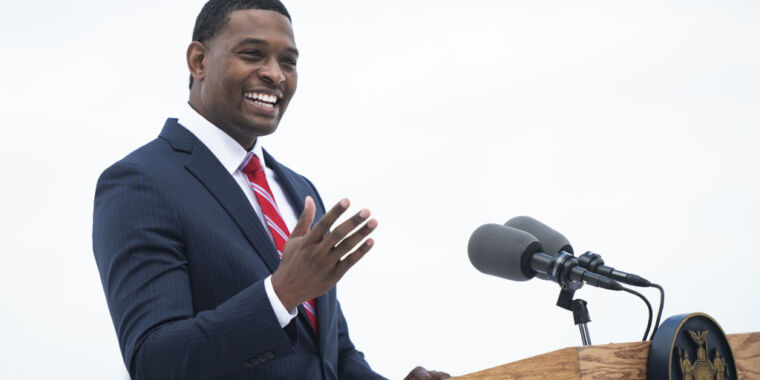 On Monday, the Environmental Protection Agency announced what it called a “comprehensive national strategy” to handle pollution by a group of industrial chemicals that are collectively called PFAS. These chemicals are relatively inert and persist for decades in the environment; as a result, there are many sites where they pollute the ground or water. And there are some indications that they can cause health issues if they accumulate at sufficient levels.

But the fact that the family of chemicals is so large has made them difficult to study—and their pollution difficult to manage. The EPA’s announcement indicates that the agency has started an expansive program to handle these challenges, from expanding the study of individual PFAS chemicals to tracing contamination and limiting future pollution.

“PFAS” stands for both per- and poly-fluoroalkyl substances. Essentially, they are large hydrocarbon chains in which some or all of the hydrogens are swapped out for fluorines. The fluorines ensure that the chemicals do not interact well with water, making them excellent options for waterproof treatments. They’re also very unreactive, meaning they don’t break down readily in the environment. Thus, PFAS contamination can persist for decades.

This chemical endurance has meant that our PFAS production has resulted in a large range of contaminations; the EPA lists potential sources of PFAS chemicals that include food, food packaging, household and personal care products, industrial sites, the soil, and drinking water.

But studying the results of that exposure has been complicated. The exact chemical composition of a PFAS can vary based on how many carbons are involved and how many hydrogens are replaced by fluorine. So a wide number of chemicals that fall under this label have been produced—in some cases, companies have responded to the regulation of one PFAS by switching to its unregulated chemical relatives. The EPA couches its description of the substances’ potential health effects with plenty of “mays” to reflect the uncertainty.

The agency’s formal Strategic Roadmap is more definitive, saying, “A growing body of scientific evidence shows that exposure at certain levels to specific PFAS can adversely impact human health and other living things.” The document goes on to describe the EPA’s approach to that growing body of evidence.

The document explains how different groups within the EPA will coordinate to provide a more comprehensive picture of PFAS contamination and identify any regulatory action it needs to take based on that information. The report lays out a number of guiding principles for this effort, ensuring that decision-making is guided by science, including information on the life cycle of PFAS chemicals once they enter the environment. There will be a new focus on limiting future contamination by keeping PFAS chemicals from entering the environment in the first place, and polluters who previously contaminated sites will be held accountable for cleanup of the substances.

Finally, the EPA will prioritize the protection of disadvantaged communities, which are often the site of industrial activity and generally lack the political clout to limit their exposure to contamination.

What does that mean in practice? On the research side, the EPA will attempt to identify groups of related PFAS chemicals and establish their toxicity profiles, carving out a middle ground between handling each chemical individually and treating all the chemicals as a single entity. These groups will then be studied to determine their toxicology, how best to eliminate contamination, and how to limit their spread in the environment. This should help avoid the issue of companies simply switching to a closely related chemical if their PFAS of choice ends up subject to regulation.

The agency will also look over existing regulations to determine ones which can be used to limit the release of PFAS chemicals into the environment. The focus here will be on shifting the burden of limiting exposure to the producers and users of the chemicals. Finally, the EPA will work on the contamination that has already resulted from decades of use. Again, part of this effort will involve identifying the parties responsible for the contamination and ensuring they play a role in the cleanup.

Some of these processes have already begun. For example, the EPA indicates that it has started a nationwide monitoring program for PFAS contamination of drinking water, and a national testing strategy is expected to be released later this year. Various toxicity studies for groups of related chemicals should be released starting this year and continuing into the future. Formal rulemaking will take longer, but it’s expected that many key rules will be completed in 2023.

All of that is in keeping with having key regulatory frameworks in place before the end of President Joe Biden’s first term. There will undoubtedly be lawsuits that delay acting on the rules, but the administration is clearly working to have a comprehensive regulatory structure in place, regardless of how the political winds shift in the future.