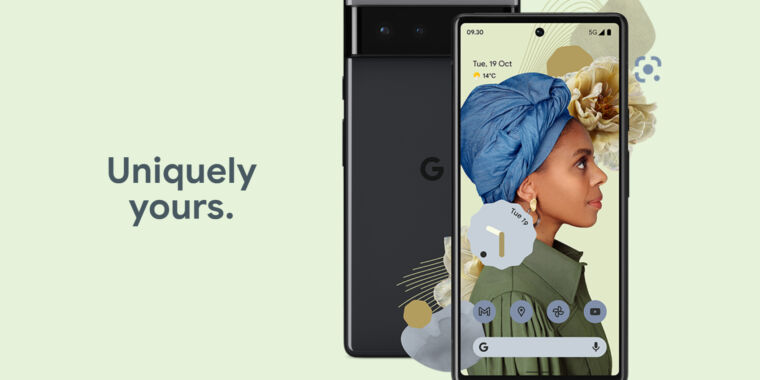 Time for a Pixel 6 leak roundup! There are so many leaks.

Over the weekend, UK retailer Carphone Warehouse posted an official-looking teaser site (which has since been taken down) for the Pixel 6. The site was full of info, most notably claiming that the Pixel 6 will come with “five years of updates.” The Pixel 6 features Google’s first main SoC, the “Google Tensor” chip, and the company hasn’t said why it decided to drop Qualcomm and strike out on its own in the chip market. Google isn’t designing any custom CPU or GPU cores (though it is getting creative with the configuration), and it has only alluded to a small handful of AI use-cases as selling points for the SoC.

We’ve long speculated that Google’s chip plans are really about extending Android’s support timelines, allowing the company to better compete with Apple, and now we finally have confirmation. Apple is up to seven years of support on the iPhone 6S, by the way.

Qualcomm presents a major problem if you want to support a phone for longer than three years, since that’s the limit of the company’s SoC support. Some companies, like Samsung, are slightly extending that time frame with three years of major operating system updates and four years of major security updates, but none of Qualcomm’s customers are empowered to support phones for much longer. With the Tensor-equipped Pixel 6, Google has only itself to answer to when it comes to the support timeline. The company makes the OS, the phone hardware, and the phone SoC, so it can support the Pixel 6 for as long as it wants.

Google has certainly done a lot of software work to make the Pixel 6 the longest-supported Pixel phone ever. Android 12 will dramatically change how new devices roll out Android’s Linux kernel with the “GKI,” or “Generic Kernel Image.” Android phones all run the Linux kernel, but traditionally, three forks happen in between mainline Linux and what ships on an Android phone—a fork for Google’s “Android Common” kernel, then a fork of that for the SoC Vendor, then a fork of the SoC kernel for your specific device. This process results in devices all running unique forks of the kernel, all of which are around two years old and run as much as 50 percent out-of-tree code.

With the GKI, which is expected to debut on the Pixel 6, Google will cut the process down to a single fork with a module system for everyone’s customizations and drivers and will cut the age of the kernel in half. Google is also introducing a formal kernel update system that will let the company ship Linux kernel updates through the Play Store. For now, the system only applies to Linux’s LTS kernel updates, but there are plans (which may or may not come to the Pixel 6) to allow other kernel updates. All of this work on standardizing and updating the foundation of Android bodes well for giving Android phones longer lives.

The site also makes some claims about the Google Tensor SoC. Besides repeating the usual claims about impressive photo capabilities, the site says the chip offers “up to 80% faster performance, so apps load quicker and gaming is more responsive.” This statement is in comparison to the previous Pixel phones, though, and keep in mind that the Pixel 5 was a $700 mid-range device with a Snapdragon 765G. Google is jumping product categories—from delivering a mid-range phone to releasing a flagship—so after sandbagging last year, claims like this are not as dramatic as they seem.