January 8, 2022 by arstechnica No Comments 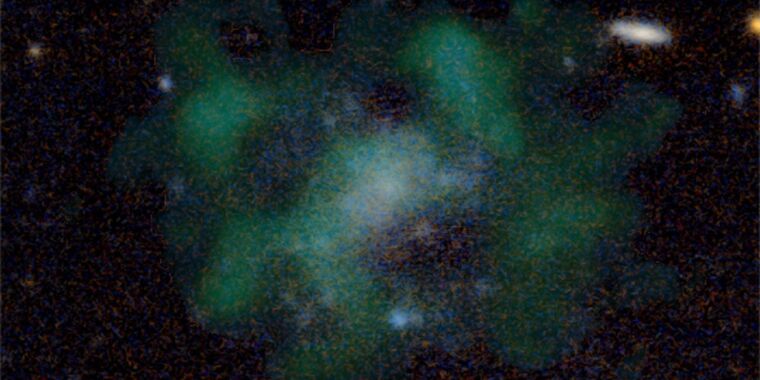 Three years ago, Filippo Fraternali and his colleagues spotted a half-dozen mysteriously diffuse galaxies, which looked like sprawling cities of stars and gas. But unlike almost every other galaxy ever seen—including our own Milky Way—they didn’t seem to be enshrouded in huge masses of dark matter, which would normally hold those stellar metropolises together with their gravity. The scientists picked one to zoom in on, a modest-sized galaxy about 250,000 light-years away, and they pointed the 27 radio telescope antennas of the Very Large Array in New Mexico at it.

After gathering 40 hours’ worth of data, they mapped out the stars and gas and confirmed what the earlier snapshots had hinted at: “The dark matter content that we infer in this galaxy is much, much smaller than what you would expect,” says Fraternali, an astronomer at Kapteyn Astronomical Institute of the University of Groningen in the Netherlands. If the team or its competitors find other such galaxies, that could pose a challenge for scientists’ view of dark matter, the dominant perspective in the field for at least 20 years. Fraternali and his team published their findings in December in the Monthly Notices of the Royal Astronomical Society.

Based on decades of telescope observations and computer simulations, scientists have come to think of dark matter as the hidden skeleton of the cosmos; its “joints” are massive clumps of invisible particles which host galaxies large and small. But Fraternali isn’t the first to glimpse an exception to that rule. A few years ago, Pieter van Dokkum, an astronomer at Yale, and his colleagues discovered similar galaxies with the Hubble telescope that also seemed to lack dark matter. “These galaxies that we found in 2018, they created a lot of controversy and discussion and follow-up work because they were unexpected and difficult to explain,” van Dokkum says.

Those other galaxies lived in a crowded environment, where bigger, neighboring galaxies frequently fly by, possibly pulling away dark matter with them. In contrast, Fraternali’s galaxy is pretty isolated, with no such bothersome neighbors, so its dearth of dark matter can’t be explained that way. “It could be very significant,” van Dokkum says. “How do you get stars and gas in that location together without the help of dark matter?”

These strange objects have come to be called “ultra-diffuse galaxies.” They’re extreme outliers: in terms of their mass, they’re minuscule, but they’re spread out over vast distances. Some are as large as the Milky Way, but with only a hundredth as many stars—or even fewer. They’re so close to being transparent that they’re tough to spy in the night sky. “They’re slightly fainter in the center, so they’re difficult to detect. Now, with better telescopes and deeper observations, they have become more well known,” says Mireia Montes, an astronomer at the Space Telescope Science Institute in Baltimore and an expert on such galaxies.

Starting in the 1960s, American astronomer Vera Rubin and others first revealed the likely existence of unseen, or “dark,” matter while measuring how fast stars in galaxies whirl around the center, showing that inner stars orbit at different speeds than outer ones. Based on those stars’ rotation, scientists calculated how much mass the galaxy must have to keep them constantly orbiting, rather than being flung into space. For many galaxies, that mass was many times larger than that of all the stars added up. Scientists resolved the problem by inferring the presence of some kind of dark matter, which doesn’t emit or reflect light and which must be making up the rest of the mass that’s holding the galaxy together.